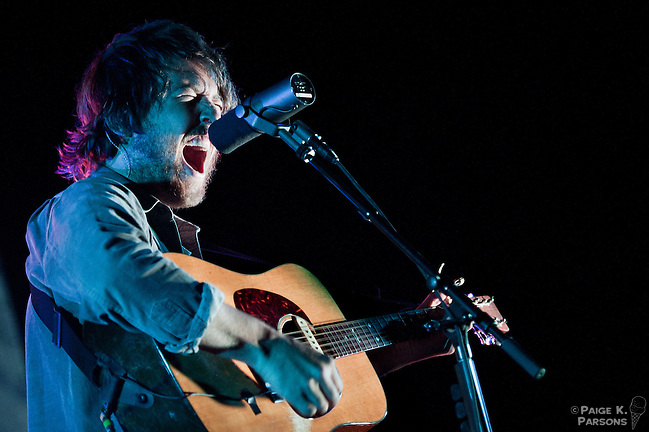 It’s been a few weeks, but the magic of The Fleet Foxes show at The Henry Miller Memorial Library in Big Sur still lingers in my mind. It was one of those special nights where you want to take in every detail, remember every sound, and hope that the band plays encore after encore.

When I last saw the band perform at the Fox Theater in May, it was only their third performance of the new Helplessness Blues material. I knew the next time they came around they’d have months of touring experience with their new material and would be tight as a drum. The Fleet Foxes performance at Henry Miller does prove that practice makes perfect, and I was in awe of their hauntingly tight multi-part harmonies.

As is the case at most Henry Miller shows, virtually everyone was seated or laying on blankets while the band played. I found it much harder to be “in the moment” while seated and half way through the show I decided to stand off to the side so I could sway and bob to some of my favorites such as Grown Ocean, Helplessness Blues, Mykanos, and Raged Wood. For me, that’s when the show when from good to great. I’m sure it was a change in my focus, and not the bands that caused this shift. Things became downright magical when Robin came back on his own for an encore. He played a new song, “I Let You” and it just tore at my heart. His performance of “I Let You” took me back to 2008 when I first saw Fleet Foxes at The Bottom of the Hill. Both then an now I was completely humbled and honored to be present while Robin Pecknold sang with more raw emotion and vulnerability than I’d ever witnessed before or since.

Robin may be the band member with the most recognition, but it’s really a case of an incredibly talented group that works so well together that makes the performances memorable. The addition of multi-instrumentalist Morgan Henderson has added depth and complexity to the instrumentation of their live performances. It was fascinating to see his bass clarinet solo on “An Argument” in person. I’d wondered how it was played each time I heard the cacophony of sound on CD. Another part of the Fleet Foxes live magic is drummer J Tillman. When I think folk, I don’t normally think of drums, but J. Tillman makes me think of thunder and passion and he keeps the energy building on songs such as “Sim Sala Bim” and Mykanos. Robin’s also fairly quiet, and J. was quite the storyteller and jokester, keeping the mood light and the audience at full attention as guitars were constantly tuned to perfection between almost every song.

The Henry Miller Library always has an expansive screen behind the stage, as they’re often hosting film screens, and it was put to excellent use as beautiful geometric pasterns in earthy tones were projected behind the band, seemingly synchronized to the songs. The geometric oscillating paters were sometimes overlayed by what looked like views of the milky way, and it couldn’t have been a more perfect complement to the majestic star-filled skies of Big Sur. The graphics were courtesy of Robin’s older brother, Sean. The stars and forest of redwoods were courtesy of mother nature, and it was a perfect combination. Robin and J Tillman waxed on about a giant roaring campfire the night before, and I couldn’t help but think that a huge campfire by the side of this tiny forest stage would have been perfect for what I consider their classic sing-along tunes, Ragged Wood and White Winter Hymnal.

It’s been rewarding and exciting to see The Fleet Foxes grow both in popularity and live performance complexity. This show at The Henry Miller Library was a rare chance to see all the intensity the band has been pouring into multi-thousand seat amphitheaters instead put forth in an intimate 200 person crowd in the coastal woods. It’s a night I never want to forget.

(A setlist follows the photo gallery below.)

Yet another music video I put together using pictures from a recent Fleet Foxes concert. Animoto.com makes putting these videos together a snap. Enjoy!

I’m off to bed, but here are a couple quick images straight off my camera from tonight’s magical Fleet Foxes show at The Henry Miller Memorial Library in Big Sur. The band was in fine […]